Get Off My Lawn

I can't tell if he's laughing or crying.

The day after I signed up, I attended my first class. I was nervous, but the atmosphere in the studio is so relaxed and calm I soon felt at ease. I bought a mat and rented a space to store the mat. So my new mat and I entered the practice space. It was dark outside and the studio was softly lit and smelled of incense. I felt a peace and calm wash over me as I sat and inhaled the incense and had this feeling of being in a church–like this was a holy space and it embodied a reverence that had me thinking really big thoughts, and really little thoughts, and then I was just present in that moment.

The class starts with setting an intention. You put your hands together and place them near your heart and think of a goal or focus for the next hour. It could be something specific I want to work on, like being a better listener or more open minded, or it could be sending out love to a person. And then everyone says OM and then we begin the class. Of course, I’m giving a simplified version, but I’m a rookie so I hope this will suffice for now.

I can sort of do this one.

What surprised me is the duality of yoga. I had never pushed myself so hard physically for such a sustained period, yet the gentleness of the transitions accompanied by the soothing voice of the instructor made it possible for me to maintain a challenging but consistent pace. I have never sweated so much ever in my entire life and I loved it. Even my kneecaps and ankles were sweating. My fingers were like prunes. It felt as though bad things were being leached from my skin. I was conscious of my body, and my mind felt uncluttered, clear, and focused; I was always aware of my breathing, inhaling, exhaling, to the rhythm of movements.  And though I was physically spent after the session, I felt refreshed and energetic. 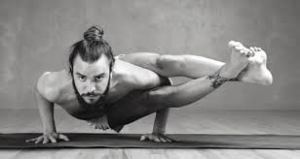 On a couple of occasions between classes I had these strange bouts of melancholy that were intense but short lived. At times it felt good to have this kind of sadness, or perhaps it was unrecognized peace of mind.

Though some of the postures were difficult or unattainable for me, devices like blocks and straps can aid in achieving the more difficult aspects. And the instructors are amazing. Sometimes there are two, one directing the class and the other floating about offering aid and correction to students. This is done in such a gentle and giving manner that I couldn’t stop saying thank you. I was so grateful to be helped in such an enlightened manner.

The guy on the left is Andrew. He teaches the noon class I go to and he’s great.

Class ends with everyone closing their eyes and breathing for five to ten minutes, then chanting OM three times; the acoustics in the room are such that the chant sends chills up my spine. I leave with a feeling of contentment that lasts long into the day, and with each session the feeling of contentment is edging closer to a state of bliss.